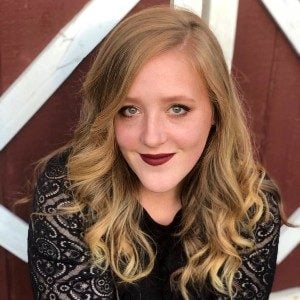 Twenty twenty-one is shaping up to be quite a year for Patricia Mayes.

In April, she and her fiancé, Neil White, are getting married. She is on track to complete the online Master of Business Administration in General Business at Longwood University two months later. She had toyed with the idea of earning an associate degree in business.

“But I saw how affordable the Longwood MBA program was and also knew some people who had gone there,” she said.

“It was enticing that I could finish in a year. Why spend two years getting an associate degree and paying more for it when I could get a master’s degree that would fill out my resume more?”

Mayes works full time as an executive support specialist for First National Bank in Lynchburg, Virginia. She started as a teller for the company more than four years ago and worked her way up.

“I wanted to further my career and do something in the industry I am in now,” she said. “Plus, it was all online, which is perfect for me. The flexibility is great.

“My fiancé has two kids, and we like to go camping a lot. I did some of my coursework while I was camping. It’s nice being able to set your own schedule and do it from anywhere.”

Mayes grew up in Lynchburg and graduated with a bachelor’s degree in studio and digital art and graphic design from Liberty University in 2015. She also attended Central Virginia Community College.

Before landing a position at First National Bank, she was an associate manager of a movie theater for Regal Entertainment Group for more than five years.

“I wanted to further my career path after I finished my undergraduate degree,” she said. “I would like to be in senior management someday.”

Mayes took a few online courses during her undergraduate years, so she had some experience with distance learning before she enrolled in the MBA program.

“At first, I was a little concerned,” she said. “Some people told me that Canvas was hard to navigate, but I find that it is easier to navigate than what I used previously when I was in school.”

“I am not very adept with math, but the Managerial Economics teacher, Dr. David Lehr, was accommodating with explaining things I didn’t understand,” she said. “It’s been 10 years since I had a math class. I learned a lot from it, and it will help me with what I do on a daily basis at work.

“I deal with financial information and how our company is performing compared to our peer banks. A lot of the things I learned in the course help me see how those forecasts come together and rate us among our competition.”

The Information Technology course, taught by Dr. Darrell Carpenter, provided Mayes with a broader scope than she expected when she started it.

“I was expecting it to be mostly about computers, but a lot of it was theory and asking ‘Why is this business performing better than another one, and how is the system helping [it] perform better?'” she said. “There were a lot of case studies I found interesting. The business professors are outstanding.”

Mayes is already impressed with the information she has learned in the online MBA program. She is eager to continue to increase her knowledge base to build on her real-world experience.

“The information is completely applicable to my career,” she said. “I work under the CEO and in human resources. Policy is applicable to what I do. I also do a lot of work with our board members and put board packages together and financial reports.”

With the encouragement of her family and friends, Mayes knows she will stay the course and hopes to attend the commencement ceremony to receive her degree in person.

“I definitely want to walk [the graduation stage],” she said. “It’s going to be more exciting for me than my bachelor’s degree graduation. Longwood is also not far from where I live. My fiancé is very supportive. When I say, ‘I have so much to do,’ he always tells me, ‘You got it.'”

Although Mayes is still in the early stages of the program, she is thriving in the accelerated pace of the fully online format. She also has some advice for potential online MBA students at Longwood University.

“I can’t believe I am done with those first two courses after seven weeks. It’s a lot of work, but it’s also very rewarding. You will learn a lot in a short amount of time.”

MBA Grad Tom Turletes' Online Experience
Tom Turletes had always wanted to go back to school to earn his master’s degree. He found the perfect occasion when his company, Westinghouse Airbrake…
Read more
Online MBA Student Sarine Thomas Adds Up the Benefits
When Sarine Thomas moved with her family from India to the USA nine years ago, she fell in love with numbers. The blend of business…
Read more
6 Tips for Managing Remote Employees
A TIME magazine headline in the early months of the COVID-19 pandemic declared, “The Coronavirus Outbreak Has Become the World’s Largest Work-From-Home Experiment.” Now that…
Read more
Carina Bethea Adds Acumen to Experience With Online MBA Program
After almost a decade in wedding photography, Carina Bethea wanted more business exposure to broaden her frame of reference. So, Bethea enrolled in the Master…
Read more
Shawn Mulvey Expands Business Acumen in Online MBA Program
Shawn Mulvey’s ergonomics career incorporates the engineering in his blood and the psychology in his wheelhouse. Having found his niche, he enrolled in the online…
Read more
Anne Hagen Earns MBA, Then Promotion to Chief Executive Officer
Thirty-seven years after Anne Hagen graduated with a bachelor’s degree, she returned to higher education as a student. Then, she became chief executive officer of…
Read more
Online MBA Grad Katelyn Gough Came Back to Move Forward
Katelyn Gough was finally ready to check another box on her list of accomplishments when she enrolled in Longwood University’s Master of Business Administration –…
Read more
5 Industries Being Transformed by AI
When you consider that artificial intelligence powers “any machine that does things a brain can do,” there is immense potential for the technology to develop…
Read more
Former Music Major Michael Cohen Sings New Tune in Online MBA Program
A change in educational direction hit all of the right notes for Michael Cohen. After earning a bachelor’s degree in music, the Washington, D.C., area…
Read more
3 Advantages General MBA Graduates Have in a Post-COVID Economy
A Master of Business Administration (MBA) program develops problem-solving, business and leadership skills. MBA programs are designed to promote critical thinking and help students to…
Read more
Monica Rutledge Hones Entrepreneurial Bent in Online MBA
The sound of wedding bells is music to Monica Rutledge’s ears. In agreement are the many couples who choose to begin their married lives at…
Read more
Single Mother Katie Lewis Seizes Opportunity to Earn MBA in Online Program
August 14, 2021 was memorable for Katie Lewis. The Wilmington, Delaware, native celebrated her birthday on the same day she completed the online Master of…
Read more
Have a question or concern about this article? Please contact us.

Articles that appear on this website are for information purposes only. The nature of the information in all of the articles is intended to provide accurate and authoritative information in regard to the subject matter covered.

The information contained within this site has been sourced and presented with reasonable care. If there are errors, please contact us by completing the form below.

Timeliness: Note that most articles published on this website remain on the website indefinitely. Only those articles that have been published within the most recent months may be considered timely. We do not remove articles regardless of the date of publication, as many, but not all, of our earlier articles may still have important relevance to some of our visitors. Use appropriate caution in acting on the information of any article.

Submit the form below, and a representative will contact you to answer your questions.
Or Call 833-960-0138

By submitting this form, I am providing my digital signature agreeing that Longwood University (Longwood) may email me or contact me regarding educational services by telephone and/or text message utilizing automated technology at the telephone number(s) provided above. I understand this consent is not a condition to attend Longwood or to purchase any other goods or services.